Taking a break from the looks at a singular game, let us look at what makes a boss-fight function. What makes it good, what makes it bad; starting with Azel from the Playstation 2 game God Hand.

If we were to categorize bosses, Azel would fall under the ‘dark version of yourself’ bosses. He’s the mirror to the protagonist Gene; of what is possible with the game mechanics at offer, which makes him even more an intimidating foe. There are no ‘unfair’ fallbacks possible. If you have it so does he. It is due to this setup that beating him will give the feeling that you’ve mastered the mechanics of the game, as you’ve essentially beaten the ‘designer’ at his own game. Azel is the binary manifestation of the designers playing as Gene against your own Gene.

God Hand is a game that allows four types of offensive when it comes to attacks. A fully customisable moveset on the one side, empowering yourself with the “God Hand” to gain temporary immortality and stronger attacks, special “Roulette moves” that cost Orbs (you usually have between two and four) and a few powerful moves that protagonist Gene has at his disposal the whole time. Azel has all this to his disposal as well. His general moveset consists of a combination of all attacks the player can acquire throughout the game. The big exception is that he has infinite Orbs and he can summon his “God Hand” ability at regular intervals.

Azel is the last fight before the final boss giving you one last chance to show how well your skills have progressed throughout this game. He’s akin to a final exam. It should then come as no surprise, yet it actually does, that Azel is vulnerable to everything. Whereas the final boss is a stationary foe this one is humanoid and can be stunned, juggled, counter-hit, backstabbed, interrupted, etc. It’s actually here that Azel is at an dis-advantage as he cannot counter-hit, stun or juggle you; but he gains his own set of benefits as explained throughout this article.

When the fight finally begins you’re met with an upbeat but joyful tune with a guitar and drum combo. The music features a lot of instances where it’s just the drums being supported by other instruments.. It’s a song that fits the setting very well and it is no surprise that the song, “Devil May Sly”, is used in nearly every trailer the game sported before its launch. Changing our senses from ears to eyes Azel is a foe whose design is angular compared to that of Gene. He’s got shades, sports a more vertical hairstyle and has more color contrast in his clothing compared to the blue design of Gene.

As he throws his first punch the player will most likely recognize the repertoire at Azel’s disposal. He’s got his standard mixture of attacks, but what already makes these unique is how he’s got moves that look alike but have different timing while also having the “Back-step Kick” move. This allows him to dodge backwards and then dash towards you with a kick; resulting in making a defense against his barrage of attacks one of knowledge and reflex. Knowledge the designers can assume the player has, as the moves on display are his own. If Azel activates his God Hand then the player knows what is going on and will need no explanation. The boss can also dash up to you to instigate a “mash encounter”, forcing you to mash all the buttons as hard as you can to win the clash. One can almost feel the designer mashing somewhere in Clover’s studio, trying to beat you. It should come to no surprise that – being the final encounter like this – this ‘mash’ requires the most input-total, beating it on Hard is very unheard of. His “Roulette moves” are done at random intervals with a clear visual start-up allowing the player to react. These moves are practically invincible and force the player on the defensive while keeping an eye out for that singular opening or a hefty punish. 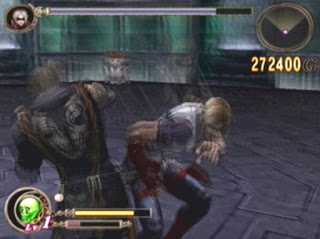 Throwing your first attack back at Azel will throw you for a loop though, as he’s the first one to dodge your moves. Whereas in previous humanoid encounters a hit was taken or blocked, here Azel will duck and weave just like you can. This isn’t random but more based on timing, if you time it while he’s doing nothing he will simply dodge just like a regular player would. It’s this sole mechanical addition that forces the player to stop focusing on spamming his most powerful move when an opening is found and rely more on his gut feeling during the engagement.

Once hit enough and past his 50% health threshold Azel will frequently activate his own “God Hand” ability. During this state he will dodge all your moves and gain increased speed and offensive powers. But in a twist he can still be punished if hit during the startup of his own moves or when attacked from behind. Making Azel completely immune to any type of engagement during this phase would turn the fight in a bore with the player running around waiting for it to wear off, but now it changes into a defensive dance with the player dodging and weaving waiting to spot that one opening in Azel’s back or during one of his own moves; a brilliant play from the designers.

There is one element of the fight that probably raised some discussion within the staff who designed the gameplay mechanics of God Hand. That is the ability to block attacks and whether or not to give Azel this ability as well. Blocking is a move that nearly every enemy in the game possesses. It is for this reason that there are numerous guard-break moves at Gene’s disposal. To give Azel the ability to block would give him a defining trait that Gene does not possess as the player himself is unable to block. But if he was not given the ability a good portion of the combat options the player had used throughout the game would become useless; negating the feeling of the ‘final test’ that Azel brings to the table. It’s an interesting discussion and one that I don’t think the designers took lightly in designing this fight. Finding the balance between giving a final test to the player to see what he can do with all the tools at his disposal, or creating a complete copy of the player character to fight? In the end the designers chose to differentiate Azel just enough from Gene to allow him to have moves of his own such as blocking and more liberal use of “Roulette moves” and the “God Hand”.

While the fight continues the conclusion is that both mechanically speaking and thematically Azel is as sound a boss as one can desire in a game of any genre. He is a serious threat to the player, tests if he’s deserving of the credits, allows for the game’s full mechanics to be used and has enough weaknesses to discover that aren’t immediately obvious. A great boss.

Azel is one sly devil, one that may have you cry.

Did you enjoy this article? Stinger Magazine and its forum are run by one guy in his free time outside his regular job as an art-director. If you care to help him out, or thank him, consider clicking the button below:
Become a Patron!
5
3195